IT ALL BEGINS WITH PASSION
Enis Inci is one of the most well-dressed men in the whole of Istanbul.

When he isn’t traveling to Italy to oversee the Naples-based workshop out of which his bespoke tailoring business operates, or on appointment with customers throughout the city and elsewhere, you can find him lounging in his shop in Bebek, tapping the ash of the end of a cigar while he reaches for a glass of whiskey in an impeccably well-fitting suit.

If that sounds decadent, it very well may be. And yet, Enis treads the line between opulence and arrogance rather masterfully. He is aware of his appreciation for the finer things in life while not letting this define his behavior towards others – that would be unbecoming of a gentleman, an archetype that he has stitched into almost every aspect of his lifestyle.

OFF THE CUF
Enis first got into the tailoring business years ago when he went to London to study English. A family friend offered him a cleaning job at Norton and Sons, one of Saville Row’s most venerable tailors, and it was here that he got his first taste of what bespoke fashion really was.

“Bespoke suits are my passion. Honestly, [when I started] I didn’t understand what the philosophy of this tailor business was. Then, maybe five or six years later, when I was working in the hotel industry, I ordered some suits from a bespoke tailor, and I decided to work in some tailoring shops in Istanbul full-time.” 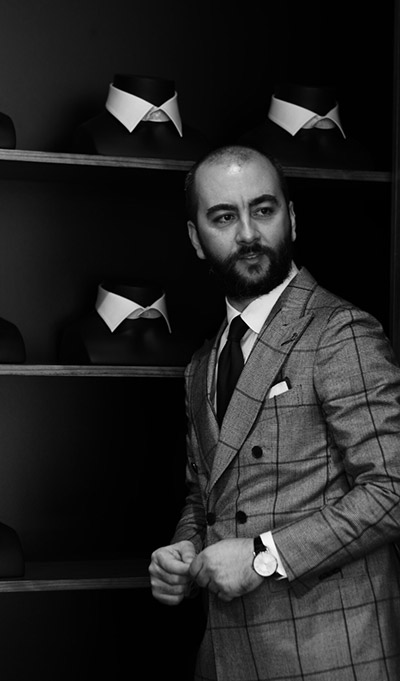 The passion is apparent in his work. The suits that come out of Sartoria Napoletana roll across the surface of the skin the way a soft breeze might, and it almost feels like the material might fall of completely were it not anchored to the exact dimensions of the body.

Although Enis spent his time in London working on Saville Row, his own shop focuses on Neapolitan-style suit-making, as the name implies. And while he admires British bespoke fashion a great deal, he prefers a more Mediterranean chic.

“I spent a lot of time studying tailoring at Saville Row. I came to a point where I was interested in the difference between Italian and British suits; the stitching, the fabric, the cut. My favorite style is British, but it’s too heavy. Too much in the shoulder. And Italian tailoring changes almost every day, but some things are permanent. For example, they make very light jackets. People want something that looks sharp but is also comfortable. Neapolitan is something between British and Italian. The cut and stitching comes from Naples’ culture, which focuses on elegant and light products.”

It’s more than just the Neapolitan aesthetic that appeals to him, though. Practicality plays an important role as well, especially in a chaotic city like Istanbul.

“Istanbul is a very difficult city. The weather is always changing. If you walk a lot here, you must be careful about what shoe you choose, for example. I prefer light fabrics. One meter of fabric is going to weigh about 250 grams. In total this means about 750 grams on your body. Then, with the lining and everything, it should be about one to one-and-a-half kilos maximum, which means a light suit. But one suit made of standard fabric in the British style is around three or three-and-a-half kilos. That’s too heavy.”

ISN'T THAT DANDY
Enis believes that there are some currents within the fashion world, itself an inherently fickle industry, that never fully fade, and that most of these can be found out by looking to the past. He draws inspiration from some well-known international fashion icons and from historical names, too.

Mustafa Kemal Atatürk, the soldier-statesman who founded the modern Turkish Republic in 1923, was also known for his appreciation of the aesthetic. It is tempting to think he would recognize the poise with which Enis carries himself. And, just as Atatürk did, Enis casts an eye to Europe for some of his influences.

“I also follow some icons from the past, like Gianni Agnelli. My inspiration comes from the past. The real dandies of the 20’s and 30’s, the British men in clubs smoking cigars – they were the real gentlemen of the world. These days, fashion is crazy. We don’t have to follow such things. If you follow the permanent trends in fashion, you’re going to be ok.”

Which is not to say he doesn’t experiment. If you follow his Instagram, you might see him confidently pulling of a color combination that almost defies reason (and certainly tradition), and be surprised to find out how well it actually works.

“If I wear a classic suit, I always prefer the gilet vest with a mono lapel jacket. Normally, I prefer the double-breasted jacket and I try to pull in some color to my life. Sometimes, this is a mistake. You can see the fabric in a [sample] book, but you have to imagine how it is going to be as a complete suit. And people look at you for different reasons. They love it, they hate it, maybe they are jealous. You can’t understand this from their eyes. It’s a good thing sometimes. If all the people are looking at me, I can tell I’ve gone a little too far (laughs).”

Enis eschews hues that are, in his mind, too close to being drab or cliche. The colors and tones he chooses almost always have a flash to them that is noticeable but not too distracting, not unlike the scales of a fish that turn vibrant in the right sunlight.

“I prefer green and burgundy, then brown, navy blue. Never black. It’s not elegant to me. Maybe for tuxedos. But, even then, black is too serious. You look like you are going to a funeral. You might look like a government agent of something. Today, even James Bond wears a navy suit!”

PLEATING GUILTY
There is plenty of work to be done in the Turkish bespoke scene, according to Enis. Whether it be a lack of ideas, quality tailors, or simply an unfamiliarity with fashion, he is doing his best to change the landscape.

“When I started to work, I learned that there was something wrong about this art – I call it an art, it’s not just a business – and I decided maybe I can change some things. The tailors here usually do everything wrong. In the past, there were real, quality tailors in the city, but not anymore. Nobody learns from the old techniques and books anymore.”

Importantly, he believes that the individual is their own best style icon, something that should be reflected in each and every way they represent themselves to the world.

“I always say that we are not a fashion brand, we are artisans. A bespoke suit means that we do whatever the customer wants. The best brand is your name on the inside of your jacket, not some famous international brand.”

A SUITABLE PRICE
For a tailor in Bebek, one of Istanbul’s more upscale neighborhoods, it’s almost surprising to hear Enis’ egalitarian approach to the bespoke world. “I’m trying each day to teach people what bespoke is. It’s not about the price of the suit. Our prices are appropriate for almost any budget. Bespoke is a luxury thing, yes, but today, people aren’t looking to buy something cheap. If you buy five suits in a year, don’t. Buy two, and make sure they are high quality. Create a budget for it. Before I started this business, I did the same thing. You don’t have to be rich to wear a bespoke suit or to have style.”

He does seem to go beyond the role of a mere tailor in order to help people achieve a complete style.

“My customers are like my friends. They ask me everything, even which cologne they should use, what restaurant to go to, what kind of car they should drive. Sometimes, I act as a shopping advisor, I go with them to buy shoes, accessories, everything.”

Enis is obviously aware of the fact that many people avoid going the bespoke route due to it being prohibitively expensive. And while he does his best to make the fashion affordable, he also acknowledges that there is at least some connection between price-tag and quality.

“If you decide to buy a bespoke suit for the first time, it’s both good and bad for you. It’s going to cost a lot in the future. After you put on even one bespoke suit, you will never wear a ready-to-wear suit again. You will feel the quality of the fabric and how the measurements make a difference.”

And at Sartoria Napoletana, difference is exactly the point. After wearing one of their suits, it is hard to deny the sense of ownership that comes from putting on ‘a second skin.’ As Enis is fond of saying,

“If a suit isn’t bespoke, it isn’t really yours.”